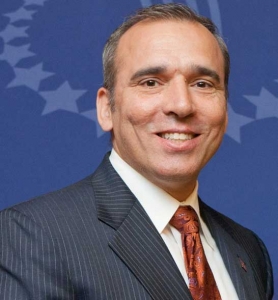 Anthony Hassan, EdD, LCSW, was appointed clinical associate professor at the USC School of Social work in 2009, serving as the inaugural director of the Center for Innovation and Research on Veterans & Military Families until 2015.

He previously served as deputy department head of the Leadership Directorate and director of the master’s degree program in counseling and leadership at the United States Air Force Academy in Colorado Springs, Colo. He transformed the graduate program’s curriculum and helped develop a health program research project to study factors promoting resiliency in the Army National Guard.

Prior to the Air Force Academy, he was the CEO of a military community health center, which ranked number one of 10 community health centers in the region. In 2004, during Operation Iraqi Freedom, Hassan served on the first Air Force combat stress control and prevention team embedded within an Army unit. In 2006, he was selected to assist East African countries with capacity building for disaster response. Hassan also led the largest military substance abuse and family advocacy programs in the Pacific.

Hassan serves as the chair of the task force for developing national guidelines for military social work graduate programs as well as a member of the Commission on Professional Development for the Council on Social Work Education. He also serves on the Los Angeles City Workforce Investment Board and e is a mayoral appointee on the Los Angeles Military Veteran Advisory Council, a new initiative out of Mayor Eric Garcetti’s Office of Veterans Affairs that will advise his administration on issues affecting the city’s military community.