When veterans come home, they may face multiple health challenges—physical, mental and psychological.

To be better prepared to serve them, about 40 students from the University of Southern California and Mount St. Mary’s College participated in an interprofessional workshop aimed at creating collaborative care strategies for veterans and military families.

Madeleine Bruning, pediatric nurse practitioner and professor with both Mount St. Mary’s College and USC, said that veterans could present many overlapping health challenges. For example, a veteran could have a brain injury, post-traumatic stress and amputated limbs, and would therefore need mental health treatment, along with pain management, nutrition and physical therapy, among others.

“It’s not just one professional doing what they do well,” she said. “Veterans and service members need a detailed plan of care that pulls all these people together.”

But before the students could begin working together, most of them needed a general overview of military culture and common health challenges experienced by veterans returning home, like sleep problems, substance abuse/misuse, anxiety, depression and thoughts of suicide.

Social work Assistant Professor Carl Castro, a retired colonel in the U.S. Army, told students that they needed to understand the values that drive the military and how they differ from civilian society.

Primarily, the military places high value on unit cohesion, whereas civilian society holds a high regard for individuality and individual achievement.

“Mission takes precedence over everything else,” Castro said. “There is no ‘me.’ You work as a team, and you’re as strong as the weakest person on that team.”

The appearance of weakness leads many veterans and service members to delay treatment, making military cultural competency imperative among health care professionals so they do not risk alienating them.

Similarly, Kimberly Finney, a clinical associate professor with the USC School of Social Work, said that language is everything with this population.

Emily Hendrickson, a second-year USC physician assistant student, found the information valuable. “This is great. This is what we’re going to be seeing, especially in California where there are so many veterans,” she said. 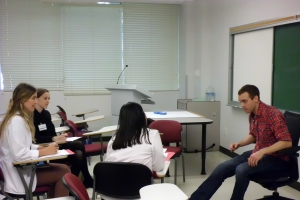 When the students were divided into interprofessional groups, they each interacted with a Standardized Patient, an actor who simulates a set of symptoms.

“Casey Smith,” a 25-year-old National Guardsman, came into urgent care complaining of knee pain. He originally injured his knee 11 months ago jumping out of a helicopter during a training assignment. The pain had been chronic since, but was aggravated this day after he tripped over one his daughter’s toys.

The students asked about his pain, his medical history, his family life. They soon uncovered that he drank a lot, that his wife recently left with their daughter, that he suffered from anxiety attacks, and that his best friend was recently killed in Afghanistan.

The tag-team effort was a great learning experience, but there were challenges.

“I wanted to explore further, but I also wanted to be respectful because he’s here for his knee,” said Laura Mosedale, a Master of Social Work student, who began asking questions about his mental health. Mosedale also said that she wasn’t used to asking personal questions with other people in the room. “I can tell that he’s uncomfortable, and that makes me uncomfortable.”

Maki Kamimura, a second-year physician assistant student, said that more experiences with military patient populations would ease her anxiety. “Right when he came in, I thought this was going to be really difficult.”

Kamimura was so flustered that she skipped steps she normally wouldn’t. “He told me he fell out of a helicopter, but I didn’t even ask what he did to his knee. I didn’t even ask if the pain radiated anywhere and that’s something I always ask.”

Luckily, for Kamimura and the patient, the other members of the interdisciplinary team could pick up where she left off, and help paint a more complete picture of the patient’s health care needs.

“I think the students who attended really seemed to capture the essence of the day,” Bruning said. “They began to appreciate what the other professions do and saw the value in collaborating.”

The workshop was hosted by Mount St. Mary’s College, the Center for Innovation and Research on Veterans & Military Families at the USC School of Social Work, the Keck School of Medicine of USC, and the Primary Care Physician Assistant Program at USC.