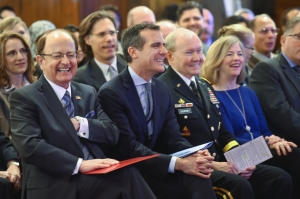 With more veterans in Los Angeles County than any other part of the nation, a robust effort of academia, nonprofits, government and the private sector has stepped up to meet their needs and their families’ – and top military officials have noticed.

“My message to you is, ‘well done.’ The highest compliment you can give in the military is ‘well done’ and get out of the way,” said Gen. Martin Dempsey, chairman of the Joint Chiefs of Staff, acknowledging the work of USC and the School of Social Work’s Center for Innovation and Research on Veterans & Military Families (CIR) for taking the lead in their local community and developing an innovative, data-driven approach to helping veterans.

“What you have done here is both unique and inspirational and, more important, it’s effective,” Dempsey told a gathering of nearly 300 on Monday at Town & Gown on the USC University Park Campus.

In September, CIR released the findings of the first comprehensive needs assessment survey of a large urban military population in the nation. The Los Angeles County Veterans Study found that a majority of service members leaving the military are unprepared and experience challenges during their transition home.

According to the report, more than 80 percent of veterans return home without a job and 40 percent do not have a permanent place to live. More than half of post-9/11 veterans said they did not know where to go for care.

Those and other findings have been guiding the work of the Los Angeles Veterans Collaborative, a network of more than 400 organizations and stakeholders that meets monthly to discuss some of the most pressing issues facing the local military population, and Mayor Eric Garcetti’s veteran policy initiatives, which have focused on veteran employment, homelessness and access.

“We know that the most important mission we have is to ensure that when our veterans return to civilian life that we welcome them with much more than a smile, a hug, and a thanks,” Garcetti said. “We must ensure that they receive the benefits they have earned.”

Dempsey said this very nature of partnering with a university research center is what has made Los Angeles such an innovative model.

“That’s the power of it. You tailor what you do to what veterans in this part of the country need,” he said.

USC President C. L. Max Nikias said that the center’s report is only the latest in a long history of university support for veterans and the military community.

“Service and sacrifice are Trojan ideals and it’s only fitting that USC’s commitment to our nation’s service members is as enduring as our dedication to community,” he said.

As the highest-ranking officer in the U.S. Armed Forces, the chairman of the Joint Chiefs is principally responsible for advising the president, the secretary of defense and the National Security Council. His Office of Reintegration focuses on facilitating coordination among agencies and private-public partnerships to foster community solutions to support returning veterans.

Sharing the Los Angeles model as a best practice will not be difficult, Dempsey said. The challenge lies with whether it is employed and how it is personalized to specific communities.

“The best ideas I see as I go around the country generally happen from the bottom up, not the top down,” he added.

Dempsey also spoke about how the Department of Defense needs to do a better job of preparing service members for their transition out of the military and working with communities who will receive them. Those efforts will only help strengthen the nation’s security by ensuring that the all-volunteer force will be taken care of even after their service has ended, he added.

Dempsey’s predecessor, Adm. Mike Mullen, visited USC in 2010 and spoke about the strains placed on service members and their families, and how many struggle to be connected to services once they return home.

“We can celebrate for a moment on how far we have come, but our job is not done,” said Anthony Hassan, clinical professor and director of CIR. “We know from our data that veterans still need our support and we still have more partnerships to build.”