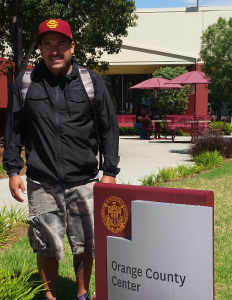 Joshua Pena, a veteran of the U.S. Marine Corps, is pursuing his Master of Social Work at USC. (photo/courtesy of Joshua Pena)

Joshua Pena’s dream had always been to pursue higher education.

Although it was briefly put on hold when he joined the military, he is now close to achieving his goal of earning a master’s degree at the USC School of Social Work, focusing on children, youth and families, and military social work.

The Gary Sinise Scholarship recipient wants to translate his passion for serving others into a career closing the gap between veterans and civilians—especially among military families.

But the road here was not always smooth for Pena.

After high school, Pena enrolled at Fullerton College in California. Mounting family issues a year into his schooling, Pena lost the motivation to go to class. He dropped out, realizing his half-hearted effort wouldn’t cut it.

Not long after, in 2003, Pena was watching news reports of the Sept. 11 terrorist attacks and of soldiers deploying to Iraq. Instantly inspired, he joined the U.S. Marine Corps. He spent three years traveling to 12 countries throughout Asia and Africa, providing humanitarian relief in the Philippines.

He extended his contract when he learned his unit was heading to Iraq.

“From the beginning, I wanted to go out there,” he said. “I just felt like it was part of my duty to serve my country.”

By late 2007, Pena was back from Iraq and trying to fit into a society that no longer felt like his own.

“The transition back was a little tough,” he said. “I didn’t do much in the first months. I didn’t look for work, and I found it difficult to find a job.”

After months of living as an outsider in a world he felt did not understand him, Pena decided to recommit to his dream of higher education. In 2008, he re-enrolled in Fullerton College, but again encountered challenges.

“I felt isolated, and I didn’t really connect with [other students],” he said. “They didn’t really have any life experience. I was 24 and had just gotten out of the military. I had traveled the world and gained a lot experience. It was just two different mentalities.”

Pena finally found comfort in the school’s veterans club, where people shared his experiences and similar issues transitioning back to civilian life.

As president, Pena made a lot of improvements to the dying club: He secured the club’s own headquarters, priority registration for veterans and computers for the financial team. By the time he left, the club had successfully built a bridge between veterans and civilians on campus.

“It helped us break down a lot of barriers,” he said. “I was happy with where the club was going.”

Pena eventually graduated from San Francisco State University and started working at Home Depot. Although he was moving up the ranks, he still felt unfulfilled.

“I realized there was no purpose to the work I was doing,” he said. “I wasn’t serving anybody.”

That’s when Pena decided he wanted to go back to school and get a master’s in social work. He chose USC because of its military focus. USC is the first private research university to develop a military social work specialization that aims to graduate students who are prepared to meet the unique needs of active duty service members, veterans and their families.

Currently, Pena is interning with ABC Unified School District in Cerritos, California, helping elementary and middle-school students. In the future, he hopes to work with military families and children, whom he knows can have a hard time adapting to civilian life, especially when a veteran comes home.

“I always liked being of service to others,” Pena said. “The USC School of Social Work is going to give me the tools I need to be good at it.”