A celebration of the unique lives and sacrifices of children from military families was held earlier this month at the Los Angeles Public Library’s Central Branch.

In honor of Military Child Month, the event was organized by the Mindful Warrior Project and its partners – the Office of Mayor Eric Garcetti, the Los Angeles Public Library, and Operation Family Caregiver.  It offered a variety of activities including a puppet show, face painting, balloon hats and a drum circle. There were crafts and other interactive activities personalized for the older children. Healthy and organic snacks were also provided.

Among the most popular attractions were the photo boards, which were designed to look like Spiderman and Wonder Woman. The boards read, “Military kids are superheroes, just like their parents who serve.” This quote reiterated the notion that the whole family serves, including military-connected children who may experience multiple moves throughout their childhood and grapple with issues of deployed parents.

“Each year I try and customize it more so that it’s really about the military kids,” said Gail Soffer, founder and executive director of the Mindful Warrior Project. “It’s not about adults, it’s not about resources. Here’s a day to honor kids whose parents are serving or who have served. Each time it gets more and more special.”

The event was about much more than fun and games. The children learned from different members of the community, including Los Angeles Police Department officers who were also veterans of the U.S. military. The officers were there to show the children another person in uniform, like their military family member. They saw how these officers served in the military, and continue to serve their community in a new capacity. The children received police badges, and became deputized officers.

During another presentation, trained dog handlers taught the children the difference between service dogs, therapy dogs and emotional support dogs. They showcased the various tasks these dogs can perform. Children were taught the importance of asking before petting whenever they see one of these dogs.

The closing ceremonies provided the children official recognition for their service. The LAPD officers led the pledge of allegiance. The children received personalized event certificates, which were signed by Mayor Eric Garcetti and then filled out on-site by a professional calligrapher. The library provided gift bags, which the children could fill with a variety of books and toys to take home.

Some of the families return each year – from the time their children are infants. This is something that Soffer cherishes and looks forward to. She hopes this can be an event the children look forward to as well. She said it is always worth the effort and enjoys seeing the smiles on the children’s faces. “It couldn’t be more rewarding.”

Based on parent feedback, it looks like Soffer’s getting her wish as one parent mentioned to her, “after last year’s event my son told me ‘dad I felt really loved and honored.’” 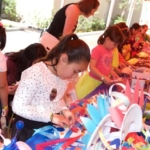 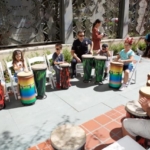 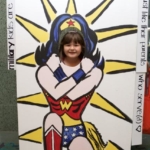 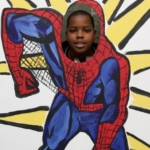 About the Author: USC CIR