In March, Iraq and Afghanistan Veterans of America (IAVA) held their annual lobbying effort in Washington, D.C. “Storm the Hill” gathered 32 veterans from across the nation to meet with 150 members of Congress and their legislative directors to discuss the pressing issue of veteran suicide. The U.S. Department of Veterans Affairs reports that approximately 22 veterans die by suicide per day, i.e., nearly one per hour, 8,000 a year and 100,000 since Sept. 11, 2001. The lobbying effort produced Senate Bill 2182 “Suicide Prevention for America’s Veterans Act,” sponsored by Sen. John Walsh (D-Mont.), the first Iraq war combat veteran to serve in the Senate.

USC Master of Social Work student Adam Renteria was one of the veterans who participated in “Storm the Hill.” 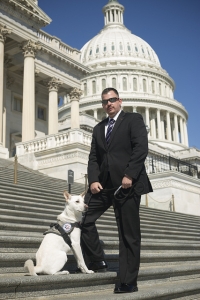 As a University of Southern California student pursuing a master’s in military social work, my passion is to strengthen the transition experience among veterans and their families. While in Washington, D.C., we started a national discussion to combat the veteran suicide rate by lobbying for legislation that would increase access to care and improve quality of care. The residual effects of this policy are exponential because they address the compounding issues that may lead to suicide, such as unemployment, homelessness and broken relationships.

These issues of veteran transition, especially combating the compounding issues that may lead to suicide, are especially important to me because I almost took my life.

When I came home from the war in Iraq in 2004, it took nine months for me to find myself broke and unemployed, homeless, disconnected from my family and with an apathetic attitude toward the value of my life. I spent a year trying to find my way, and with no knowledge of services, I resorted to self-medication. From 2004 through 2007, I incurred a DUI arrest, had other run-ins with law enforcement and a near-fatal motorcycle accident that rendered me in intensive care for seven days. I remember hearing the ICU doctors inform my parents that I was not going to live through the night.

Since my accident, I have been intense about seeking treatment and healing from the deadly symptoms of post-traumatic stress disorder and traumatic brain injury. I’ve known several veterans who have died by suicide through the years, and I felt that if I was able to survive both the war and my accident, then it must be my divine calling to serve others who are coming home, too and ensure that they and their families have full access to the highest quality of services.

While advocating on Capitol Hill in Washington, D.C., I pulled from both my personal experiences and my unique skillset as an MSW student and intern with the USC Center for Innovation and Research on Veterans & Military Families (CIR) to effectively describe the needs of veterans and their families from a personal and an academic perspective. I discussed CIR’s research efforts that support the relevance of the new bill by describing the multiplier effects of its avatar technology and curriculum development that directly addresses the quality of care concerns identified by training behavioral health professionals to work with service members and veterans.

As 22 veterans die by suicide per day, this country must join the conversation and demand that this rate be reduced. One suicide per day is unacceptable; 22 is atrocious. Since the Vietnam veterans returned home, we have seen a paradigm shift on how we accept their return. We thank veterans for their service, applaud them with standing ovations, and shower them with charity; however, we fall massively short in supporting their transition with the appropriate services that return them to a state of normalcy, peace and healing from the atrocities and traumatic effects of war. The United States is at a critical point in which we must understand that the essence of welcoming home our service members begins with preventing them from dying by suicide.

PHOTO: As part of Storm the Hill 2014, IAVA planted 1,896 flags on the National Mall, one for every veteran that has died by suicide since January 1, 2014/Credit IAVA