A Tribute to Steve Robinson

A Tribute to Steve Robinson 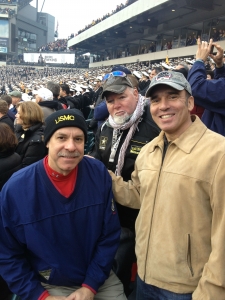 The veteran community has lost a stalwart supporter and advocate this month, and I lost a friend and colleague.

Steve Robinson, who died earlier this month, was a former Army Ranger, a retired soldier and a lifelong veterans’ advocate, who lived by the code of “duty, honor and country.” Steve worked tirelessly on behalf of veterans and military family members, most recently as vice president of external veterans affairs for Prudential.

It was in this capacity that I first met Steve.

We quickly began collaborating on how we could partner to help veterans coming home. We were more than just colleagues. We were friends. Our friendship always centered on work, but it never seemed that way because we shared the same passion to fight on behalf of veterans. Whether it was at the Army-Navy game or along Venice Beach, our conversations were always about doing more to support the men and women who wear the uniform and their families. Working with Steve was always fun. He would regularly use his ranger skills and counterinsurgency tactics to get us into C-suites or restricted areas at events. He would say, “Anthony, just follow me and act like you belong here.” I did and it worked.

Steve marched forward against political pressures with great courage to address the injustices levied on our wounded warriors at Walter Reed Army Medical Center. He stood with character and conviction when others turned a blind eye to the health disparities for all veterans. He listened with patience to soldiers who were sidelined because of behavior that was viewed as detrimental to good order and discipline. He heard through the fog of their pain and related consequences of war that were deaf to others. Steve worked relentlessly with our CIR team to promote applied research, military clinical cultural competence and community action as a means to aiding veterans with their transition home.

As General MacArthur defined the American Soldier in 1962, so too we define Steve Robinson today:

His name and fame are the birthright of every American citizen. In his youth and strength, his love and loyalty, he gave all that mortality can give. He needs no eulogy from me, or from any other man.

But when I think of his patience under adversity, of his courage under fire, and of his modesty in victory, I am filled with an emotion of admiration I cannot put into words. He belongs to history as furnishing one of the greatest examples of successful patriotism. He belongs to posterity as the instructor of future generations in the principles of liberty and freedom. He belongs to the present, to us, by his virtues and by his achievements.

I have witnessed that enduring fortitude, that patriotic self-abnegation, and that invincible determination which have carved his statue in the hearts of his people. From one end of the world to the other, he has drained deep the chalice of courage.

Steve was reliable, brave and victorious in all that he did and he has left us all better prepared to face the challenges that remain. We are forever grateful for his service.