Gerardo Reynoso joined the Army because he wanted adventure and prestige. He signed up while still in high school during peacetime and was captivated by the idea of escaping his Southern California neighborhood and living in Europe, where the most danger he could possibly see would be in Bosnia.

But two days before graduating from boot camp, the plan changed. It was Sept. 11, 2001.

“I didn’t even realize it happened,” Reynoso said. He and the other privates went into a room that was streaming live news coverage of the attacks. “We thought it was fake, and they were testing us to see if we were still willing to join.”

From peace to conflict 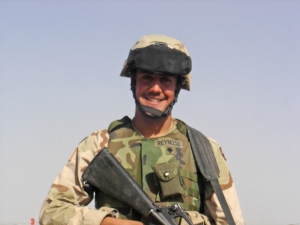 Reynoso went from joining the military during peacetime to participating at the onset of the Iraqi invasion and, along the way, encountering many of the same transitional challenges that hadn’t then been receiving much-needed attention.

His return home and experiences have led to his current pursuit of a Master of Social Work in mental health and military social work from the USC School of Social Work. The Dean’s Scholarship recipient plans to work in clinical settings for a couple years before transitioning to research, and ultimately to pursue a PhD and policy work.

The clinical experience will help him know first-hand what returning veterans are experiencing, but Reynoso said, “in order to advocate for policy to meet those needs, data gathering is critical, and that’s where research comes in.”

Reynoso is currently assisting Carl Castro, assistant professor and director of research at the Center for Innovation and Research on Veterans & Military Families (CIR).

“Good research, based on solid, scientific theory, allows us to understand what are the most important aspects that ensure a successful transition from military service to civilian life,” Castro said.

Reynoso’s transition challenges began early on after his first deployment to Iraq in 2003 when he returned to Germany.

Since Germany was not involved in the war, the return from deployment did not include a warm embrace or celebration. Instead, Reynoso was greeted by a nearly empty base.

“It was very isolating, very lonely. All we did was drink for a whole year. That’s how we prepared for the next transition,” he said.

During a subsequent deployment to Afghanistan, he lost a good friend.

“I didn’t properly grieve,” he said. “I saw less combat, but relationship-wise I lost more.”

Life as a Civilian

He left the military in 2007 and moved to San Diego where he found a job as a contractor fixing helicopters on a Navy base and at Camp Pendleton. He still had “a lot of issues.”

At his wife’s urging, Reynoso sought help at the VA but had a terrible experience with a therapist who was not culturally competent.

Reynoso eventually found his way to a community college and the University of California, Irvine, where he studied psychology and became involved with veterans organizations there.

“A lot of us were student veterans and we were functioning, but we had a lot of similar problems, and we weren’t addressing them unless we were with our own kind.”

Reynoso found an outlet that worked for him in groups and at vet centers. It was these experiences at vet centers and noticing that much of the staff was USC alumni that initially turned him on to the USC School of Social Work.

“Everywhere I looked, everything was highlighting USC as where I needed to go,” he said. “It offered the widest spectrum [of post-graduate experiences] and the ability to focus on helping veterans.”

For his clinical work after graduation, Reynoso would like to be at a vet center or the VA, which provided an undesirable personal experience.

Reynoso knows a lot of well-intentioned people work at the VA and, like all people, can have bad days.

“That doesn’t change the fact that the veteran that comes through the door is in need,” he said.

“It’s a very critical moment where you need to hook them and let them know that this is the right place, and we’re going to help you. It’s important to get them when they’re willing to take a chance.”