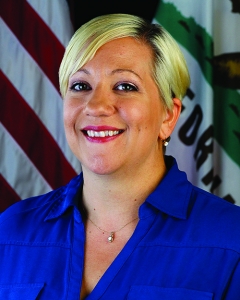 Gena Truitt, MSW ’12, sits on the California Veterans Board, an advisory body to the state’s Department of Veterans Affairs, also known as CalVet (photo/Truitt)

Gena Truitt is a social worker with unique perspectives.

The Navy veteran and USC School of Social Work alumna works at the VA Loma Linda Healthcare System in San Bernardino County, where she interacts directly with veterans as a homeless outreach social worker.

Aside from this personal interaction with veterans, Truitt, MSW ’12, is also one of the few people with the opportunity to improve the role played by the state’s Department of Veterans Affairs, also known as CalVet, in the day-to-day lives of veterans. Last year, Truitt was appointed by Gov. Jerry Brown to serve on the California Veterans Board, a body that advises the CalVet secretary and advocates for veterans statewide.

“I didn’t think they would pick me in a million years,” said Truitt, who felt underqualified compared to her counterparts, some of whom have established careers and 20-plus years of service.

“I had four years in the Navy. I was enlisted. I’m fresh out of grad school. I felt like the lowest qualified person on the board,” she said. “But I’m one of the only ones on the board who works with veterans every day.”

What made Truitt think she was underqualified ended up setting her apart and has allowed her to bring a different perspective to the board.

Because of her daily experience working with homeless veterans, Truitt has pushed for the board to survey communities on best practices and how the state can better partner with them in this mission.

Truitt hopes the town hall will serve to educate the rest of the board on this issue, which she confronts daily, and to compile ideas on how the state can provide better assistance filling in gaps in service.

Truitt’s graduate school experience, especially her focused studies on macro-level social work, has also contributed to her push for effective, prevention-based policies and programs that look at the whole picture.

“When I see a lot of these grants to help veterans, none are requiring the use of evidence-based practices,” she said. “I see a lot of Band-Aids.”

Truitt wants to push for measurable results and thinks the board can have a voice in encouraging policymakers and philanthropic organizations to direct their funding toward programs and organizations that can measure their success beyond just giving a veteran a home.

Truitt knows how important these basics are for service members transitioning out of the military, but she also knows firsthand how more effective policies and clearer communication can improve chances at a successful transition to civilian life.

Truitt met her husband while serving in the Navy. When she left the military in 2004, she followed him as he was transferred overseas. For six years, she was a stay-at-home mother and military spouse, occasionally taking online courses to complete her degree.

When they returned to San Diego, Truitt had decided to pursue a master’s degree at the USC School of Social Work. It was around the same time that her husband decided to leave the military.

She didn’t quite realize all the challenges of transitioning until then.

“When I got out, my husband had a full-time position. Now, I’m going to grad school, and we have no income at all,” she said.

“We were pretty arrogant and thought he’d get a job in no time,” she said, adding that instead it took eight months for her husband to find employment. Meanwhile, they were being told to vacate their housing; but without a job or income, no one would rent them a place.

“We were so unprepared and had no idea what to expect,” Truitt said. “We had no idea any of the resources or how to navigate the systems.”

Truitt’s personal experience makes her very sensitive to the transition process for other veterans and military families, and how easy it might be for them to find themselves in unstable housing situations.

“There’s nothing worse than when I get these transitioning veterans in my office. They just separated, and now they’re homeless—with their families.”