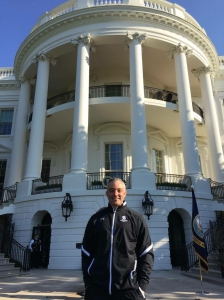 It’s not every day the 44th president of the United States calls you out by name on the south lawn of the White House.

But on April 14, 15-year U.S. Army veteran and MSW@USC student Casey McEuin was bestowed that privilege as President Barack Obama honored him and other wounded veterans at the Wounded Warrior Project’s Soldier Ride kick-off at the White House.

McEuin, currently a veteran transition program specialist with Hire Heroes USA, served in the Army as an infantry platoon sergeant at Fort Carson, Colorado, with the 4th Infantry Division.

McEuin served in Afghanistan from 2011-2012 where he was injured during a complex attack on his outpost. Not wanting to leave his soldiers, he asked to remain in Afghanistan for the remainder of his tour regardless of his injuries. Subsequently, McEuin had complications from his injuries, forcing him to have numerous surgeries, which resulted in his medical retirement from the Army.

“He had to medically retire, something he had never imagined. He felt lost, struggling to find work and living out of his Jeep,” Obama said. “Today he’s still fighting for his brothers and sisters with Hire Heroes USA. We are proud of you, Casey.”