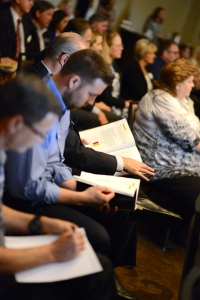 Like their counterparts in Los Angeles, many service members returning home to Orange County are facing significant barriers to a successful transition back to civilian life, according to a new study from the USC School of Social Work.

“The State of the American Veteran: The Orange County Veterans Study” by the Center for Innovation and Research on Veterans & Military Families (CIR) at the USC School of Social Work details the findings of a survey of more than 1,200 veterans living in Orange County. The report mirrors a similar study conducted last fall in Los Angeles, the first comprehensive study of a large urban military population which explored numerous areas, such as transition challenges, employment, finances, housing, health and access to services.

For the most part, the results from Los Angeles and Orange counties painted similar pictures of the general transition challenges faced by veterans in Southern California; however, one area was particularly surprising, said Anthony Hassan, clinical professor and CIR director.

“The figures on mental health challenges were sobering,” he said.

In general, a considerable number of all surveyed Orange County veterans were not receiving care for physical and psychological issues, but the most recent generation of veterans were less likely to seek treatment for mental health conditions compared to older ones (59 percent of post-9/11 vs. 44 percent of pre-9/11).

Other key findings from the Orange County study include:

The study also identified barriers that prevent both groups from accessing care; however, post-9/11 veterans reported higher perceptions of barriers, including not knowing where to access services, difficulty scheduling appointments, and concerns about confidentiality and treatment. Twenty-four percent of both pre- and post-9/11 veterans reported they could handle the challenges on their own.

Similar to the Los Angeles version, this report made specific recommendations that called on collaboration among government and local community leaders.

“Without local data, people were not listening,” he said. “Now we can drive targeted prevention and early intervention strategies that can lead to improved veteran policy, program delivery and collective philanthropic giving.”

Speaking during the report’s release at the Hilton Orange County/Costa Mesa on Feb. 19, Adm. Mike Mullen, former chairman of the Joint Chiefs of Staff, agreed that data offered in the study should propel local action.

“If we wait for government to fix this, we’re going to wait for a long time,” said Mullen, who established the Office of Warrior and Family Support, now called Office of Reintegration, that focuses on successfully reintegrating service members and their families into civilian society during his tenure as chairman.

“This has to happen at the local level and build up to a point where the state and national governments grab hold,” he said. “The local leaders who will pick up the baton are critical.”