The nation’s nearly 22 million veterans and their families are confronted with difficult and enduring challenges.

Returning veterans face high unemployment rates, and homelessness is a national concern. Some veterans are coming home with severe physical injuries. Aging veterans must grapple with the further complications of injuries incurred during combat decades ago. Many have untreated mental health concerns. About 22 veterans a day die by suicide. These issues can strain relationships and stress caretakers. Military children are more vulnerable to suicide and depression.

During a recent two-day summit held at the University of Southern California, about 50 researchers from national and international universities gathered to discuss how research could help understand these and other critical issues.

“USC has the research expertise and relationships to drive this conversation and begin the long-term collaborative process,” said Anthony Hassan, clinical professor and director of the Center for Innovation and Research on Veterans & Military Families (CIR) at the USC School of Social Work, which hosted the summit.

“We are each doing great work in our respective fields, but all of us together can do so much more to advance the health and well-being of our military, veterans and their families.”

The inaugural summit was the first step in developing a national research agenda that would target the most critical issues facing service members, veterans and military families in the next decade. Entitled “Closing the Gap,” it was funded by
Kathleen Ell, Ernest P. Larson Professor of Health, Ethnicity, and Poverty at USC, and Deloitte.

Ell, who has focused her career on research around vulnerable populations, wanted to support an effort that could produce more research that tackled veteran and military family issues holistically. 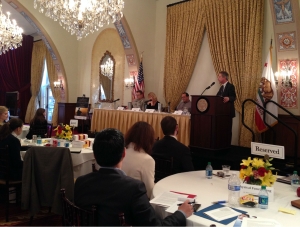 A panel discusses the latest in behavioral health research.

Carl Castro, assistant professor and research director at CIR, said academic researchers provide a different understanding of problems, compared to the military and other government agencies. However, they are excluded from contributing to the national research strategy.

An independent academic-based research agenda developed from the summit could therefore be provided to the U.S. Department of Defense for consideration.

“Every year decisions are being made on what to fund, what to cut and where to reroute funding,” Castro said. “If you’re not providing input, then your research is gone.”

Such a prospect was a concern among the researchers because, as the wars in Iraq and Afghanistan fade from the headlines, the DOD could lose interest in funding certain areas to the detriment of the large veteran and military family populations.

Matt Fossey, director of Veterans and Families Institute at Anglia Ruskin University, United Kingdom, said his government was a key player in their research because it gave them access to service members before they left the military.

“What we identified was that engagement and actually getting [service members] into the program was the most important thing,” he said. “We couldn’t have done that without the collaboration and cooperation of the government.”

Echoing the importance of collaboration, Lt. Col. Brian Gilman with the Office of the Chairman of the Joint Chiefs of Staff said the work stemming from the summit would help guide that office’s efforts.

As part of the Office of Reintegration, Gilman learns about numerous programs that communities have undertaken to help their returning veterans.

“One of the hallmarks that we’ve recognized in those that achieve success is that they collect and utilize data,” he said.

Gilman added that data will help focus resources to the most effective areas, which is necessary given the sheer number of programs available that serve veterans and military families.

“One of the biggest challenges veterans face is navigating that sea of goodwill. It’s dizzying when you think about 45,000 nonprofits,” he said.

Indeed, one of the research gaps identified was evaluation.

Rajeev Ramchand with the RAND Corporation, which recently studied military caregivers, said assessments were missing from the studied programs.

“Not one was evaluating their programs to see if they benefited the caregiver or the veteran,” he said. “They’re good ideas, but we need proof that these things work.”

They also agreed to look at other problems that have not received as much attention (e.g., sexual functioning and suicide among elderly veterans) and to focus on the full spectrum of veterans, not just those who have been serving since the Sept. 11 terrorist attacks. The issues facing older veterans and their families are not the same as those who have recently returned home.

“We have just scratched the surface,” said Alan Peterson, psychologist and professor at the University of Texas Health Science Center at San Antonio.

“Ten years from now the potential impact of these meetings will be great.”